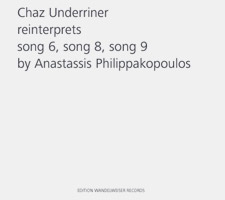 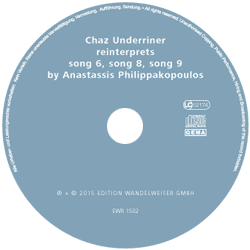 As I hear it, Anastassis Philippakopoulos’ music moves from event to event.He writes melodies.They appear and sound fluid – but this is deceptive.Close experience with them, listening as Anastassis does repeatedly to the same succession, reveals that each tone arises from a decision.For Anastassis, a choice is an event – something to be weighed and evaluated. It is also a new beginning, a thing that puts other things in motion.This can make a simple sounding song into something like a landscape,with its own history of erosions and accidents, and a musical object that can never fully be grasped, only heard and heard again. Instrumentalists are challenged to find the song in a succession of events.
Chaz Underriner’s work with Philippakopoulos’ music on this disc shares this insight.It is both an analysis of the melody events in three of the Song series and a new work in its own right. By exploding the duration of the pitches and putting distance between them (projecting the songs on a different scale altogether), very little of the “tune” remains audible.
He makes a desert of a mountain range, rendering each tone with sensitivity to local detail, and turning melody into an experience we only have as a trace, and then only when it is completed.